50 YEARS IN THE MAKING

My dad, Jack Pagano, was a meat manager at Penn Fruit Supermarket when he decided to open Pagano’s Prime Meats in 1962. After opening many locations in the Northeast, he decided to branch out to Center City at 19th and Spruce in Rittenhouse Square. That’s where I came in. Days off from school were so much fun. Dad would take me to work, and I would hold the door for customers. Later on, working everyday after school became a prerequisite. I spent many afternoons and evenings at the store from my high school years at St. Joseph’s Prep to my college years at St. Joseph’s University.

In the early 1970s, a meat shortage forced my dad to reconsider his focus. He began selling imported cheeses, and it wasn’t long before cheese was outselling meat. As a result, he increased our cheese variety to include many exotic selections and caviar. Pagano’s Prime Meats became Pagano’s Cheesery, and it was then we moved to a larger store at 15th and Walnut. At the heart of the blossoming restaurant row, Pagano’s Cheesery was a source for many up and coming restaurant owners such as Georges Perrier who would come in every afternoon and talk with my father about what he wanted for the cheese plate he offered on his menu that night.

Just around the corner from our store stood the historic Bellevue. The renovation of The Bellevue was a big event for the city, and we enjoyed first hand accounts from steel workers and contractors who frequented the store daily. When dad realized that many of these men were looking for salads, he created the first salad bar in the city. Our work table was full of butchers, so mom would cut romaine at home, and bring it into the store to serve with salads. The new salad bar was a big hit, and a healthy salad bar still stands at the center of Pagano’s Market and Bar today.

By the mid-1980s, there were three Pagano’s locations in Center City and one in Narberth, PA. Customers were able to purchase a variety of items including a superior variety of cheeses, salads, coffees and fresh baked goods. As corporate culture evolved into longer days, business professionals would line up outside the door to purchase sandwiches and home-cooked meals to go. My dad taught me everything about how to run a business, to value customer service and manage employees. Most importantly, he taught me how to treat people in general. In fact, some of the guys who work with me now started working with my dad back then. We’re truly a family.

In 1999, I opened Pagano’s Market at 8th and Market in Mellon Independence Center. It was then that I met now Executive Chef, Paul Pagliaro. Even with Paul’s classic training, we decided to go old school with the menu and implemented recipes and cooking principles that he learned from his grandma. Our chicken cutlets, meatballs, pizza and hot roast beef enticed a melting pot of Philadelphians who would line up each day including federal judges, FBI agents, police commissioners and celebrities of all kinds. A year later, we opened Pagano’s Pizzeria right next door. 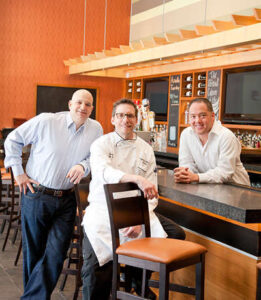 In 2008, we moved to our current home at 21st and Market, Commerce Square. It’s a 9,000 sq ft “food emporium,” as my dad would love to say. With a new location comes new customers, and we made some strategic changes including breakfast, lunch and corporate catering that provides the same quality that Pagano’s has stood for over the years. Pagano’s has always made it a priority to stay ahead of trends, and that’s never been more important than with today’s nutrition-savvy consumer. Our menu changes daily with a variety of healthy options such as farrow, quinoa and wheat pasta salads. Although ancient grains are new to the market in general, they’re not new to us.

Two years ago, I began to consider how I’d like to celebrate 50 years of Pagano’s since we started on Rhawn and Verree in Fox Chase. I went back to my architect with an idea to add a bar to Pagano’s Market. I envisioned a gathering place where friends and colleagues could come together to enjoy a great meal with craft beer and nice wine. I couldn’t think of a better way to toast my dad to 50 years of success and to thank him for the lessons in life and business. The new Pagano’s Market & Bar celebrated the bar opening on December 3, 2012. Friends, family and customers all gathered to enjoy the night together and celebrate our 50th anniversary. I know this would have made my dad very happy.

My favorite time of the day is always early in the morning. I serve coffee to the city’s decision makers before the rest of Philadelphia wakes up and meet with my chef Paul to discuss the day’s menu. I’ve been a part of this city and this business for my entire life, and there’s no place I’d rather be.